William Stafford is the author of one of my favourite poems, Traveling through the Dark.  According to his daughter, and to his own account, he used to begin his daily writing process by making notes about everyday matters: shopping lists and so on.  He sat alone in the early morning and wrote down whatever occurred to him, following his impulses. “If I am to keep writing,” he explained, “I cannot bother to insist on high standards…. I am following a process that leads so wildly and originally into new territory that no judgment can at the moment be made about values, significance, and so on…. I am headlong to discover.”
We tried this recently in my writers’ group.  Lena had brought in some scrap paper with advertisements for lawn mowers on the reverse. Looking at these, she made a note that her husband “mowed the lawn yesterday.  He managed to get it finished between showers of rain, largely because he didn’t use the bag to collect the cuttings but just let them lie where they fell in clumps and streaks”.  I picked up the theme and after a bit of thought wrote a poem that is partly fictional (I don’t possess a lawn mower, or indeed a lawn) but develops the theme … 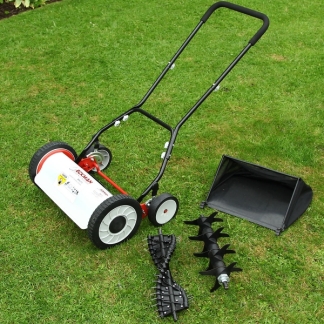 My father used to mow the lawn

With the Suffolk manual mower.

The blades rotated in their welded cage

As the grass flew into the cover.

He pulled it off the machine

And walked to the top of the garden,

To feed the cuttings to compost.

Each time he had to walk farther

As the mower progressed in its lateral course

When he finally reached the foot of the lawn

There was no more to mow. Only earth

Remained, to be fertilised

With the dregs of the compost bin

Filled with months of mowings

My father had thrown in.

My power mower returns the cuttings

To the earth in a fertile mulch.

No lifting or carrying needed.

I finish the job before lunch. 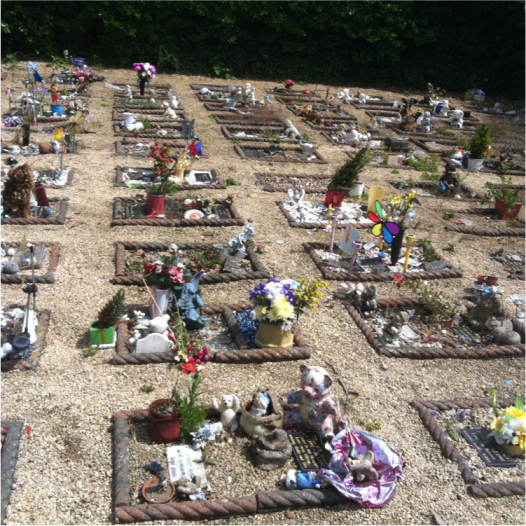 Recently, a dear friend visited for a few days.   During our first evening, when we were discussing what to do during her visit, she mentioned St George, a suburb of Bristol nearby. I asked her what her connection with this area was. After a brief pause, she told me that her first child, who had died at birth, had been interred in the Avonview Cemetery. At the time (fifty-two years previously), the hospital usually made arrangements, and the boy’s ashes had been scattered on open ground within the cemetery, overlooking the city.   My friend had been back to the spot many years before, but she felt that it would be fitting to return again.

The next day, we went to the cemetery.   As she remembered, it was very large and quite elevated. The taxi driver left us at the main entrance, and we walked up the long drive. Graves addressed us on all sides, mostly neglected and overgrown, some with broken memorials or paving. Some of the headstones had been laid flat on the ground for reasons of safety.

We turned left along a higher path.   I didn’t know whether my companion had any sense of the right direction, but after a while she turned through a gate into a small area behind a wall. This was the children’s graveyard.   The area was less than an acre in size, full of small graves, mostly stone and gravel, with vases containing flowers or colourful windmills. Children’s toys – usually figures of animals – were placed on many of the graves. The inscriptions on the graves revealed that in nearly every case the child’s life had lasted less than one day. Every one was maintained, most of them immaculately. A young couple were tending a grave not far from where we stood.

I found the sight almost unbearably moving, and stayed in the children’s graveyard while my friend continued to search for the spot where her child’s remains had been scattered. Why, I wondered, do we take such care with the memory of children whose lives ended almost before they began? It must be to do with the sense of lost potential, of unfairness. The adults commemorated by the broken graves in the main area had lived their lives. But these children had died before their parents. They had never had the chance to contribute to life, to receive love from others and to give their joy. Continuity was possible only symbolically. Their memorials would be maintained as freshly as the day they were created.

I understood, as I waited in the children’s graveyard, why the loss of a younger person is so devastating.   It is against the order of nature.   It represents the loss of the youthful virtue that refreshes and renews. Whether the loss is of one’s own child, a younger partner, or perhaps a young friend or relative, its poignancy is different from that of a deceased older than oneself who has lived out their life span.

My friend returned to tell me that she had found the place. It was, as she remembered, an open, grassy, gently-sloping hillside. It was the common ground, unmarked. There was no broken, neglected stone. A carpet of daisies formed a wide path down the hill.  Buttercups burst their deep yellow out of the long grass. Bright flowers had been tied to a young tree, in remembrance.

She stood in the field.

Afterwards, we walked to the main road, shared a lunch in a wholefood café, and caught the local train home. 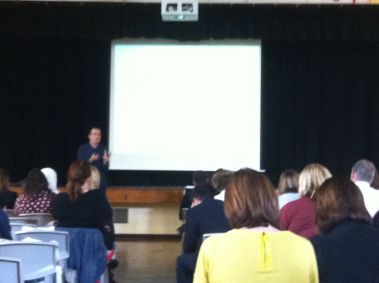 On a Saturday in May 2014, an educational research conference in a York secondary school was attended by well over a hundred people, the great majority of whom were practising teachers.   The conference organisers, researchED and the National Teacher Enquiry Network (NTEN), want to use research evidence to improve the quality of teaching and learning. More than twenty-five speakers addressed delegates in a programme that offered a wide choice of topics from ‘the learning brain’ through ‘classrooms as complex systems’ to ‘evidence-based teaching: making the prize a reality’.  All the presentations I attended were engaging and thoughtful, and I thoroughly enjoyed Debra Kidd’s drama-inspired way of demonstrating the complex systemics of the classroom (with respect to the teaching of reading, a particular interest of mine).

The means of communication and debate that united most of the delegates at the conference was neither membership of a professional association such as the National Association for the Teaching of English (NATE), nor an academic affiliation.   Whether or not they had met before, many of the delegates knew each other virtually through Twitter and shared blogs. Indeed, several used their Twitter hashtag to identify them on their name badge.   Most importantly, they were united by a commitment to learning how to become better teachers through grounded educational research. Prompt questions offered in the programme included: What is the evidence-base behind this speaker’s presentation? Is their point of view contested?   What further research do you need to undertake to ensure you have a balanced picture?

This is a world of virtual connection and debate by enthusiastic practitioners with a shared commitment to the well-being of their students. Existing networks need to consider how they can work with this new dynamic. Recently I have been working with Sarah Wilkin on the English in Education archive. The journal is 50 years old this year, and NATE has commissioned work to make the archive more readily accessible to members and others. Like the delegates at the York conference, the teachers and researchers who have written for English in Education over the last fifty years share a commitment to education as a means of supporting, developing and enhancing the lives of their students. The purpose of the journal is evident from its name: it is about language in education (not only the teaching of English), and many of the papers and debates have enduring relevance to the classroom. We shall shortly publish an account of the first fifty years of the journal and intend to supplement this by a new thematic database. We hope that this work will provide a source of ideas and evidence for teachers whose attachments may be less to traditional research and teacher networks than to the blogosphere.