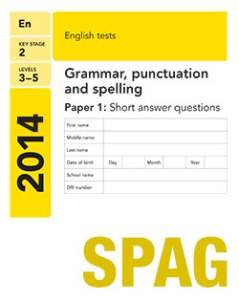 It is bad enough that children are now tested at the age of 11 on SPAG, the derogatory term used by teachers and examiners for assessment of children’s capabilities in spelling, punctuation and grammar.   Any English teacher knows that a student’s attainment in these ‘skills’ (a term that requires unpacking in this context) is better tested through meaningful writing exercises rather than through decontextualised tests.

Now the situation is becoming worse, as Debra Kidd (@debrakidd)writes in her latest blog post, Testing without Brains:

<< When SATs were first introduced it was with the aim that a Level 4b would be an ‘average’ level of achievement. Very quickly this became an expected level of achievement for the majority of pupils and now it would seem that anyone falling below this (or its point score equivalent) is a failure. In order to address this failure, children will now be expected to resit the tests in Year 7. It’s a policy of such bum numbing stupidity I can barely be arsed to write. >>

Do read the rest of Debra’s post, which describes graphically how this policy will further degrade the quality of experience for pupils and teachers.  What strikes me most is the ineptness of the assumption that an average attainment should become an expected attainment.  This reminds me of one of the first signs of political interference in the curriculum, when GCSE was introduced in 1988. It was announced that grade F (the former CSE grade 4) would be the expected average attainment for GCSE candidates. Only in Britain, I thought, would government mark the attainment of the ‘average’ child with a grade F.  Of course, expectations rapidly changed and a grade C is now regarded as a ‘pass’ for all candidates.

These attempts to constantly pressure children and their teachers on attainment (especially when the skills are poorly defined and the validity of the tests is highly questionable) need to be reviewed by an independent, non-governmental professional body.  Unfortunately, there is at present no such body to act as a forum for discussion between the teaching profession and the Secretary of State for Education.