Skip to content
HomePosts tagged 'philosophy of the absurd' 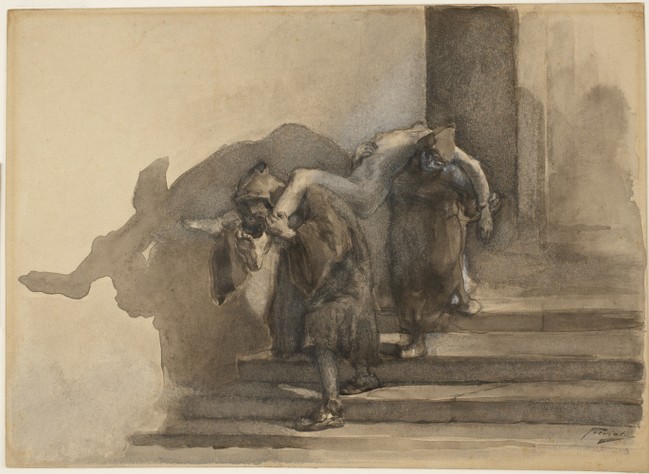 The Monatti, illustration to Alessandro Manzoni’s I Promessi Sposi, ca. 1895–99

As the reality of the coronavirus lockdown begins to take hold, popular searches on Netflix include movies titled Pandemic and Quarantine – and sales of Albert Camus’ 1947 Nobel Prize-winning novel La Peste (The Plague) have increased by 150%. La Peste chronicles a fictional outbreak of bubonic plague at some time in the 1940s in the Algerian coastal town of Oran, the town in which Camus lived during the war, separated from his wife and mother in France.  Oran is also the setting of some of his other novels.

Camus is known for his existential philosophy of the absurd.  Le Mythe de Sisyphe, written a few years before La Peste, elaborates the myth of Sisyphus’s punishment by the gods: to push a rock to the top of a hill and let it roll down to the bottom, a task to be repeated for eternity. This represents the absurdity of life, in which, as Dr Johnson wrote in 1782:

Condemned to Hope’s delusive mine,
As on we toil from day to day,
By sudden blasts, or slow decline,
Our social comforts drop away.

Sisyphus, according to Camus, lacks hope but is nevertheless happy: he is clear sighted about the nature of life.  Existentialism teaches that all we have is the facticity of existence. We have no illusions about the afterlife, or even about the nature of life on earth. Camus tried to avoid anthropomorphic descriptions in his novel L’Etranger, written in the same year (1942) as Le Mythe de Sisyphe. According to Alain Robbe Grillet (in Pour un Nouveau Roman), this attempt was not successful: the book didn’t establish a “separation entre l’homme et les choses”.  Perhaps La Peste is more successful in suggesting the absurdity of existence in an alien yet familiar world. “The first thing that plague brought to our town was exile,” the narrator writes.

As Bookerworm notes, La Peste seems prescient in its description of a city similar to those around the world currently under lockdown after a plague epidemic, the citizens condemned to an abyss of nonexistence. Oran’s bureaucrats, like President Trump and others in recent history, dismiss the plague as merely “a special kind of fever” until the evidence becomes undeniable and under-reaction is more dangerous than over-reaction. But the plague in Camus’ novel is metaphorical as well as literal. The plague is an allegory of fascism and, by extension, of mechanical, unconscious living. The citizens who are dutifully oblivious to the true situation represent the French citizens who colluded with the Vichy regime of German occupiers. Parallels with our current world situation press themselves on us, despite our social distance from mid-century Algiers. It is many years since the pestilence of Nazism, but the rise of an intolerant and aggressive nationalism in both the US and the UK demonstrates that, in Camus’ words:

Everybody knows that pestilences have a way of recurring in the world, yet somehow we find it hard to believe in ones that crash down on our heads from a blue sky.

Today, news reports daily inform us of the rising curve of death. Bookerworm states that we cannot but reckon the absurdity and impotence of human lives when hundreds of people are dying lonely without their dear ones near the bed, saying their last goodbye through video chat before being unceremoniously cremated.  What has changed over four centuries?  In Italy, many learn in school about the dreaded Monatti who, preceded by the ringing of a little bell, retrieved corpses on carts during the 17th-century Milan plague.

And yet the existential view is not of despair. Having achieved clear-sightedness about the nature of existence, we can mobilise our human resources to deal with it. The tragic absurdity of the current global situation is that, despite warnings from the World Health Organisation as recently as 2019, and a modelling exercise in dealing with a pandemic carried out by a UK government organisation in 2016, none of their recommendations for protective clothing and necessary equipment has been fulfilled. The UK and US governments have been slower than others even in taking necessary action that doesn’t need equipment, such as social distancing. Despite the rhetoric, it is evident that the National Health Service was not prepared to deal with the Coronavirus. More than three months after its flaring up in China, equipment supply is still patchy. Mass testing, which elsewhere (China, South Korea, Germany and Italy) has helped isolate victims and slow the spread of the disease, has barely started in the UK.

It comes down to the state’s being prepared for foreseeable events so as to protect citizens. In La Peste, the hero, Dr. Rieux, says: “This whole thing is not about heroism. … It may seem a ridiculous idea, but the only way to fight the plague is with decency.” Another character asks what decency is. “Doing my job,” the doctor replies.  After the exile lasts for months, the residents of Oran learn that theirs is collective suffering and decide to fight it together.

Camus insists on the need for vigilance by all actors in the narrative of life. Dr. Rieux

knew that this chronicle could not be a story of definitive victory: it could only be the record of what had to be done and what, no doubt, would have to be done again, against this terror.

The plague, he continues, never dies.  “It waits patiently in bedrooms, cellars, trunks, handkerchiefs and old papers for the day when it will once again rouse its rats and send them to die in some well-contented city.”