Leadership – what are the qualities we want from a political leader? The capacity to make the right moral and political choices seems a good start …

The World Turned Upside Down 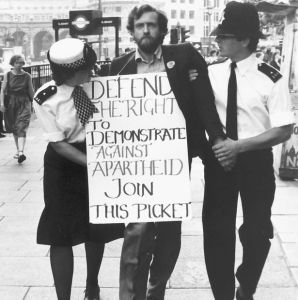 1. Apartheid: Jeremy was a staunch opponent of the Apartheid regime and a supporter of Nelson Mandela and the ANC. He was even arrested for protesting outside the South African embassy in 1984.
2. Chile: Jeremy was an opponent of the brutal dictator Pinochet (an ally of the British government under Thatcher) and was a leading campaigner in the quest to bring him to justice. In 1998 Pinochet was arrested in London.
3. LGBT rights: As noted in Pink News, Jeremy was an early champion of LGBT rights. At a time when the Tories decried supporting LGBT rights as ‘loony left’, Jeremy voted against section 28 which sought to demonise same-sex relationships.
4. The Miners’ Strike: Jeremy went against the Labour leadership and fully supported the miners in their effort to prevent the total destruction of their industry and communities. Cabinet papers released last year prove that the NUM…