Leadership – what are the qualities we want from a political leader? The capacity to make the right moral and political choices seems a good start …

The World Turned Upside Down

1. Apartheid: Jeremy was a staunch opponent of the Apartheid regime and a supporter of Nelson Mandela and the ANC. He was even arrested for protesting outside the South African embassy in 1984.
2. Chile: Jeremy was an opponent of the brutal dictator Pinochet (an ally of the British government under Thatcher) and was a leading campaigner in the quest to bring him to justice. In 1998 Pinochet was arrested in London.
3. LGBT rights: As noted in Pink News, Jeremy was an early champion of LGBT rights. At a time when the Tories decried supporting LGBT rights as ‘loony left’, Jeremy voted against section 28 which sought to demonise same-sex relationships.
4. The Miners’ Strike: Jeremy went against the Labour leadership and fully supported the miners in their effort to prevent the total destruction of their industry and communities. Cabinet papers released last year prove that the NUM… 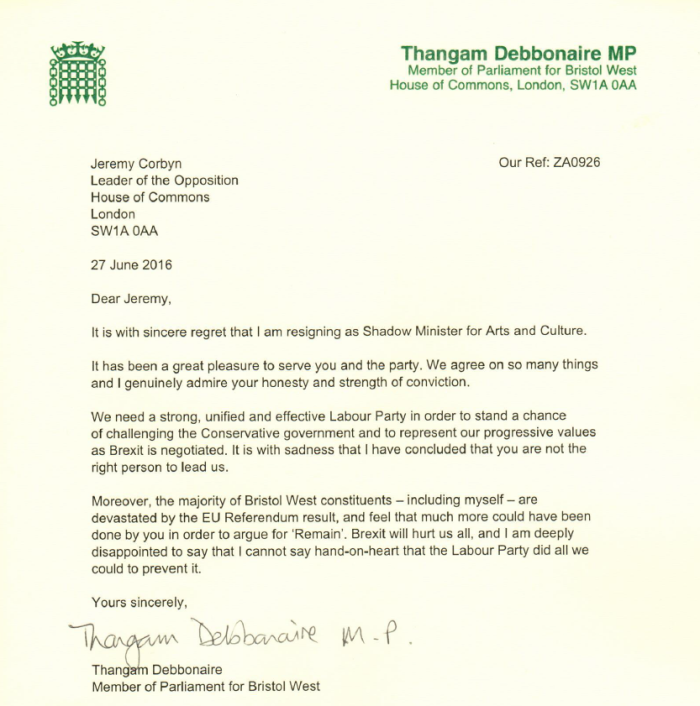 I am very disappointed to read that you have resigned as Shadow Minister for Arts and Culture.

This morning, I was considering whether to travel to London to stand with supporters of Jeremy Corbyn outside Parliament while the PLP discuss the leadership this evening. I tried to find some information about supportive events in Bristol, but could find nothing on the web. Perhaps your resignation is one reason why.

One of the reasons Jeremy was elected leader of the party is that he does not dissimulate.   It is difficult for any thinking person to be wholeheartedly in favour of the EU.   It is especially difficult for the leader of a party that has a long tradition of scepticism towards the EU and that contains a vocal group that argues cogently that leaving the EU is necessary to combat the neoliberal agenda.

The concern about Jeremy’s leadership that has been expressed by you and several of your colleagues focuses on his alleged failure to ignite the Europhiliac passions of the working class communities that voted for Brexit. I don’t know how anyone could have been expected to do this. I trust you don’t imagine that Labour could be led by a left-wing version of Nigel Farage. We know where the cult of personality has led Labour in recent decades.

As you say, we need a strong, unified and effective Labour Party. Jeremy Corbyn has the support of thousands of party members. I don’t think this true of any of the leaders of the other parties and it is a great pity that the PLP are not fully behind him at this critical time.   I shall travel to London this afternoon.